Some last minute holiday shopping and try as I might, can’t avoid the mall.

Here’s the strategy, says my wife. We’ll get up early, go somewhere for breakfast, and hit the stores before throngs of shoppers choke the aisles.

I like it. It’s worked for us in the past. And there’s no better motivator for me to get up early than breakfast.

In our household, early is a relative term. We manage to leave the house just before 11.

Living where we do, there’s a handful of choices for breakfast. Stella’s, Falafal Place, Bernstein’s Deli.

Right down the road from the house, we decide on Bernstein’s.

I’m excited. I remember that Marion Warhaft gave it a good review not too long ago. Like Falafal Place, it’s one of a handful of diners where you can still get that old-school deli-style experience.

Tucked away in the Corydon Village shopping mall, it’s half kosher market, half greasy spoon.

The market is a misch masch of portable wire-frame shelves and open boxes. The cluttered checkout is old-school, but not in a cool old-school way, just in a weary out of date kind of way. It looks as though they’re taking over an adjoining space, so I forgive the apparent disorder and focus on the diner.

Separated from the market only in that there are seats so you can watch the shoppers make their purchases and they can watch you wait for your food, it’s all booths. Mustard yellow or tomato red, they’re those old curvy, plywood and Arbrite deals, circa 1978 Salisbury House. Ugly, but surprisingly comfortable.

It’s about 11:00 as we take our seats, the cusp of late breakfast and early lunch, and there’s about 12 others already there.

We’re given menus but a black board above the kitchen order window features specials: Turkey Burger, Chili, Knish and Latkes. I’m surprised the latter aren’t staples on the menu.

Bernstein’s has an extensive list of sandwiches. From the expected Montreal smoked beef, corned beef, and pastrami to the unexpected pickled cooked tongue, chopped herring or chopped liver.

As intriguing as the pickled tongue sounds, I decide to err on the side of caution this morning and order the 3 Latkes special with sour cream (also available with apple sauce). My wife goes for the club house with a side of onion rings.

We order within 5 minutes of sitting and receive drinks immediately–a Coke, and a water (I’d already put down two huge cups of joe at home).

We sit, and talk, and a few more customers file in. Soup, and toast reaches other tables and we’re both getting quite excited, not to mention exceedingly hungry.

So we sit, tick-tock, and talk some more, whiling away the minutes…many minutes…and I’m starting to wonder where our order is.

So when the table beside us, a later arrival, gets soups I make eye-contact with the server. She spontaneously announces that by the way, they’re actually out of Latkes.

Forty minutes I’m sitting here and you’re just telling me what I ordered, you’re out of? My heart sinks, my blood pressure rises.

Do I want to order something else, she asks.

I look at my wife, hoping she’s received the signal that we should just go but she’s got that I’m about to faint of hunger and my blood sugar’s low look on her face so I say just bring her clubhouse and forget mine.

So another five minutes roll by and I think to ask how long for the clubhouse.

Five to ten minutes, says the server. Five of them roll by when she stops again.

Yeah, it’ll be ten minutes for sure, she says.

Are you kidding me? This is now 45 minutes in. That’ll make it almost an hour to get a sandwich and onion rings.

Sorry, I say, but we’re on a schedule. I don’t think we’re gonna wait.

I understand. Sorry, she says.

So we drop three bucks on the table for the Coke and a pretty generous tip considering, and make our way back into the mall. I’m dissappointed…and a little angry.

As I’m putting my jacket on, this aproned woman bolts out of the kitchen into the mall.

Nice, I think. It’s the manager, the owner coming to apologize and entice us back another time. 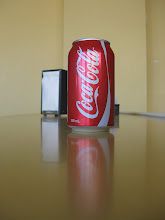 Plenty of pics of drinks on the table at Bernstein's blog. Perhaps that's 'cause it's all they can manage to serve.

You have to pay for that coke, she says.

We left some money on the table, I say.

We don’t accept money at the table, she says rather curtly. You have pay at the till.

Like a schmuck I trudge back into the restaurant, take the change from the table, trudge into the grocery area, line up and pay our for our $1.13 breakfast.

I wish I could say I’ll give Bernstein’s another try, but after that…I’m not gonna go out of my way.

And if that’s the old-school deli experience, I can see why there’s only a handful of them left.